Representative Bamidele Salam has called on the Economic Community of West African States (ECOWAS) parliament to get deeply concerned about the spate of insecurity across the sub-region, pointing out that such effort needs to be carried out expeditiously. 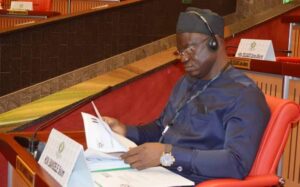 Rep. Salam who is a member of the parliament from Nigeria made the call today, Wednesday, 2nd June, 2021 at the first ordinary session of parliament going on in Abuja during which he emphasized the need to pay greater attention to movement of light weapons and ammunition across the West African subregion as well as the influx of killer herdsmen from neighbouring countries into Nigeria with illegal arms.

He expressed worry that in some instances, some countries in West Africa have come under renewed attacks and agitations that have resulted into fatalities.

Salam lamented that while in some places, there have been attacks on police stations in Nigeria, elsewhere municipal elections were placed postponed due to tensions in such areas which threatened outcome of results.

According to the parliamentarian, the number of attacks and fatalities recorded in 2021 have caused a lot of displacements and necessitated his suggestion that insecurity must be addressed frontally.

In cases of the movement of light weapons and ammunitions across the borders of ECOWAS member countries, especially in the northern part of Nigeria, he said movement of killer herdsmen who are carrying such weapons should be regulated in order not to aggravate the threat to existence of nations.

He equally asked for a more robust approach to expanding educational opportunities for Children in the ECOWAS countries so that we can drastically reduce the number of out of school children in West Africa currently put at over 20 million.

“In addition, I also made comment about the decision to standardize our curriculum and harmonise our educational system and policy. As good as this is, we also need to have a module and programme on the granting of access to education to our children. This sub-region has the highest number of out of school children in the whole world.

“Unfortunately, Nigeria has the largest number of 13.5million and I think this is worrying and I want to know what ECOWAS is putting in place to ensure that member nations adopt a robust measure of getting our children off the streets but getting them to school.

“The report that categorise the gulf of guinea as the most dangerous place in the world is quite frightening. And you cannot have a safe and secured maritime operation in this sub-region, a lot of our economic programmes and policies will be in jeopardy”, he stressed.