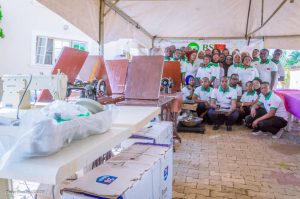 In line with his vision to facilitate a massive boost to the economy of Ede North/Ede South/Egbedore/Ejigbo Federal Constituency, Rep. Bamidele Salam on Saturday 7th March, 2020 launched ‘Operation 400 New Businesses’, an initiative targeted at raising Four Hundred (400) Entrepreneurs who are properly trained in the principles and practice of Entrepreneurship and are adequately empowered to start the businesses they are trained on.

It will be recalled that in the course of his electioneering campaign across the Local Governments in the Federal Constituency, Salam had listed as part of his Legislative Agenda if elected, the building of One Hundred (100) New Entrepreneurs every year, throughout his four-year tenure as a Member of the House of Representatives. This according to him, will facilitate the creation of jobs within the Federal Constituency and boost the economic capacity of the Constituency.

A Cross Section of the first Batch of Beneficiaries of Operation 400 New Businesses launched by Rep. Bamidele Salam
…..Presents Equipment and Startup Grants to 55 Young Entrepreneurs

At the launch, 55 Young Entrepreneurs received varied forms of Business Startup items, ranging from equipment to cash grants that amounted into several millions of Naira, which they are expected to utilize to startup their own businesses.

The 55 Beneficiaries were selected from several training programmes earlier sponsored by Rep. Bamidele Salam, including the BS-E4 Business and Leadership Bootcamp where participants pitched their business ideas to a team of business consultants and other vocational training programmes earlier held in the Federal Constituency. The beneficiaries had also gone through a process of mentorship and needs analysis that lasted for two months.

One of the Beneficiaries receiving an Industrial Leather Sewing Machine to aid his Shoe Making Business
Speaking during the programme, Rep. Bamidele Salam stated that the launch of Operation 400 New Businesses and presentation of grants to 55 Young Entrepreneurs who form the first batch of Beneficiaries, is in furtherance of his vision to develop the Federal Constituency economically. He also stated that he was committing his personal funds to making the vision a reality because he is determined to facilitate job creation and positive youth engagement. He informed the beneficiaries that his office in collaboration with a team of consultants will continue to mentor them and ensure that they truly engage in the businesses for which they have been supported.

Present at the event which took place at the Country Home of Rep. Bamidele Salam in Awo, Egbedore Local Government were leaders of the Peoples Democratic Party, party members, community stakeholders drawn from across the four Local Governments of the Federal Constituency and Beneficiaries.

Speaking after the programme, Representatives of the beneficiaries expressed their profound joy and appreciation and pledged to do their best in making sure that the vision of Rep. Bamidele Salam comes to reality.